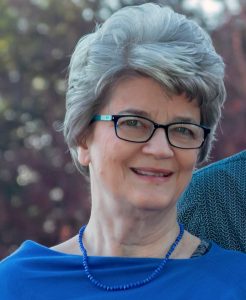 We welcome former GPS President Sandy Hokanson and her latest book The Surprising Language of Doves Held Up to the Light for our next quarterly meeting on Saturday, April 24.

Sandy Hokanson’s first book, Snow on Stone, was a memoir of raising her two girls in an antique, New England farmhouse and South of the Ordinary, winner of the 2013 Charles Dickson Memorial Chapbook Contest, chronicled her move and early years in Georgia, during which she was Editor of The Reach of Song in 2010 and President of the Georgia Poetry Society, 2011-2012.  She and her husband are now back in Massachusetts with their children and grandchildren.  Her latest work, The Surprising Language of Doves Held Up to the Light is a collection looking both backward and forward and includes her experiences during the Covid-19 quarantine.  Another book coming soon, Three Years on Emily Place, is a collection of poems and reflections about the three years she and her husband lived in the inner city of Atlanta, their ministry, perspectives on the people who live there and the racial issues that continue to affect our nation’s history.

The winner of our inaugural Ron Self Chapbook Contest, former GPS VP Trish Percival, also will read from her chapbook, Awake with Low Slung Moon. 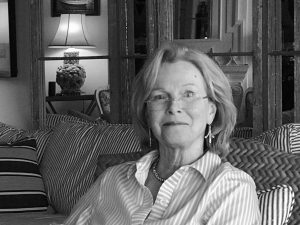 Patricia (“Trish”) Percival is the author of the chapbook Bargain with the Speed of Light, published by Kattywompus Press in 2015. The book tells the story of a box of poems left by her brother after his death and how the mysteries there led her to the practice of poetry.  A former attorney, she came to poetry in middle age, read it alone for 10 years and might never have ventured into the light if not for Tom Lux’s belief that poetry belongs in the community as well as the academy.  Her poetry life is supported by the friendships with other poets she met through Poetry@Tech workshops while Tom was Director there.  Her poems have appeared in Sixfold, Eyedrum Periodically, Town Creek Poetry, in the anthologies The Southern Poetry Anthology, Volume 5: Georgia; Stone, River, Sky, An Anthology of Georgia Poems; and Stonepile Writer’s Anthology, Volume II and in several volumes of The Reach of Song, the annual publication of the Georgia Poetry Society.